We would like to congratulate the following students who were invited to participate in the Senior School State Honours Ensemble Program (SHEP) 2019 in the September holidays:

These students came together with other students from all around greater Brisbane to participate in high level Choirs, String Ensembles and Wind Ensembles conducted by Queensland Conservatorium staff and guest conductors.

This is an excellent opportunity for our musicians who represented Genesis with excellence!

Congratulations to the Secondary Concert Band for the wonderful performance gaining them a Silver Award at the Prestige MusicFest Competition on Monday evening at Coorparoo Secondary College.

The band are celebrating their success with even more rehearsal preparation for the upcoming St Columban’s Concert Band Spectacular this weekend where eight Genesis Ensembles will be performing and competing. We wish them all well for their performances! 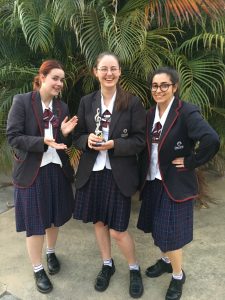